On the above date The Port Penn Fire Co. is pleased to announce that one of our own has been awarded the State of Delaware Heroic Firefighter of the year for 2022. Chief Frank Schoeffler has the honor of being this year’s recipient for his actions on a water rescue on the Delaware River in sub-freezing temperatures. The submission for Chief Schoefflers Actions are as follows:

I wish to bring to your attention of the events occurring at a Water Rescue on January 16th, 2021, and the acts performed by Fire Chief Frank Schoeffler of the Port Penn Fire Company.

On 16 January 2021 at 13:17 hrs, Delaware City Fire Company, Good-Will Fire Company, Port Penn Fire Company, New Castle County Paramedics, and Delaware State Police Aviation were dispatched to the Delaware River in the area of the Refinery Pier for an Overturned Boat with People in the Water.

The occupants of the duck boat became separated when their vessel overturned. The first occupant (Victim 1) was pulled further into the River, while the second occupant (Victim 2) was clinging to a floating dam for safety. Water temperatures were approximately 40 degrees, with the depth exceeding 10 feet in most areas. Neither subject was wearing a life jacket. Their vessel was pushed and held against a piling of the pier, displaying the brute force and strong current existing in the River at that time.

Fireboat 15 made a rapid, effective Rescue of Victim 1. Victim 1 confirmed there were 2 occupants of the boat, which allowed all crews to focus on the rescue of the 2nd Victim. Crews on land were in visual contact with Victim 2, who was struggling to stay alert and afloat.

The land crews evaluated the Rescue Sequence. The victim was out of reach of throw bags from land, and was rapidly displaying the effects of Hypothermia, and would likely be unable to hold onto the rope. There were no watercraft on scene that could have gotten within distance (due to the pier location) to effect a rescue. Trooper 4 offered their services to effect a Hoist Rescue, however the time necessary to prepare would not be in favor of a successful rescue.

Chief Schoeffler had donned a Dry Suit and PFD, and began to swim to the Victim. The current in that area is strong, and wind driven waves caused increased difficulty. At this point, Chief Schoeffler also realized his suit began leaking, exposing him to the extremely cold water. He reached Victim 2, who was clinging to the floating dam and placed him in a lifejacket. Crews from Fireboat 15 and 18-Marine-1 climbed onto the Pier, and utilized throw bags to reach Chief Schoeffler and the Victim. There was great difficuly due to the wind and distance from the pier in making an effective throw. Chief Schoeffler maintained an effective hold of the Victim, and crews pulled both of them to underneath the pier. There was no access from the pier to the water, so Fireboat 15’s crew utilized another throw bag to reach Chief Schoeffler, and pull the pair to Fireboat 15. They were transferred to awaiting EMS crews who evaluated both victims for hypothermia.

I write this acknowledging that had the rescue been delayed, the victim outcome would have been far worse, and likely tragic. Chief Schoeffler’s actions, without a doubt in my mind, saved the life of this person. Chief Schoeffler exposed himself to great personal risk, especially after knowing his suit was faulty, exposing him to the extremely cold water. Chief Schoeffer’s personal bravery and devotion to duty were in keeping with the highest traditions of the Fire Service and reflect great credit upon himself, his Company, and the New Castle County Fire Service.

I hope that this letter is approved, and submitted to both the Secretary of the New Castle County Fire Chief’s Association, and to the Medal Day Committee Chairperson.

Thank you for your time and consideration.

Personnel from Fire Stations 18, 29 and 1-5 along with some of Chief Schoefflers family gathered today at the Good Will Fire Company to make the surprise presentation. This award is usually presented at the State Chiefs Association Dinner at the annual conference, but due to Chief Schoeffler being out of town for the occasion this year Committee Members made the arrangements to be able to present the award before the Chiefs much deserved vacation. We could not be prouder of The Chief for this achievement, it does not begin to show the selflessness, dedication and commitment to all the departments he serves he is a true natural born leader. Congratulations Chief Schoeffler 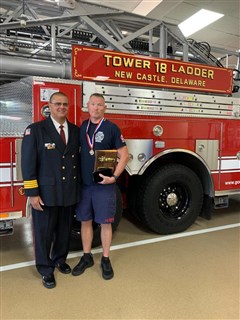 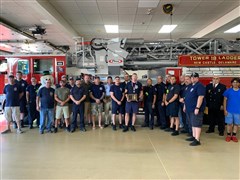 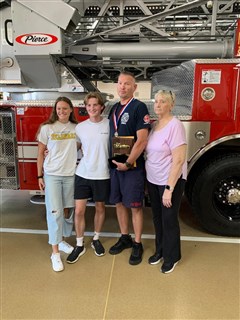 We Need Your Support

Help us to continue making a difference in our community. Please make a donation to the Port Penn Fire Company today.